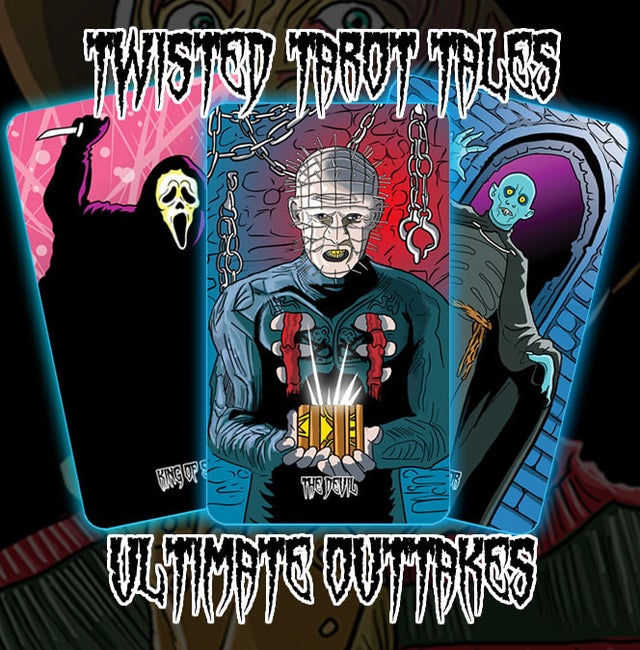 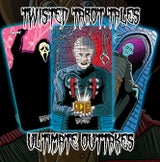 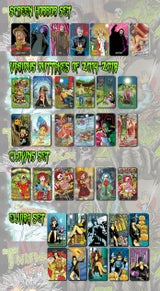 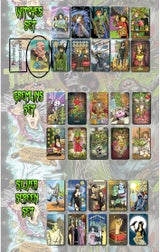 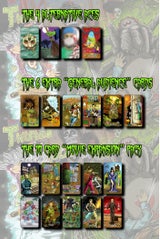 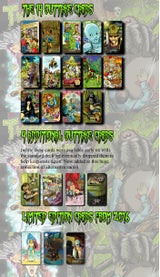 This is not a full Tarot deck and not every card is represented. These cards are designed to be used with the Twisted Tarot Tales standard 78 card deck

To celebrate 10 years of creating Tarot decks we've put together the best of the outtakes and expansion packs we've created over the years. Some cards you'll recognize, and some have never been revealed (or available) until now.

Does NOT come with box or book, just the cards.

This is a custom made deck, meaning it must be ordered through a print on demand source and therefore will take a little bit longer to arrive compared to our studio decks. Thank you for your patience in advance :)

Since this is a custom made deck, it should be noted that the printer will take the best part of a month to get it shipped to you (19-22 business days : production/processing time 2-3 business days + shipping time 17-19 business days). This cannot be helped, so please be patient.

Have a look at your Twisted Tarot Tales and if there are certain cards that don’t speak to you, you can swap them out for one from this huge set of outtakes.

While there is not an alternative card for every single card in the standard deck, there are enough here, we feel, to be able to build a more perfect deck that suits you and your personality. Again, just a reminder that this is NOT a full Tarot deck but a total of 107 alternatives that can be used with the original Twisted Tarot Tales standard deck.

Truth be told we’ve had dozens of emails asking if we’ll release this expansion pack, or that expansion pack again, and we felt it was the right time to combine them into one deck.

As far as the expansion packs go, our first set (aside from the indiegogo campaign) was available around Halloween 2018 and featured the Addams Family / Munsters, which was followed by the Gremlins around Christmas time that same year. The Witches expansion followed around early February in 2019 and the Elvira expansion was then available around Halloween 2019. With each set we released it for a limited time, and then we shelved it, but we always had the intention of combining it into a super deck.

Original Lovers inspired by Beauty and the Beast - Lovers

Supper for Wolves (inspired by the horror movie Frozen) - Moon

Hard boiled detective at a crime scene - Page of Swords

The clown set is a previously unreleased set of cards inspired by the “2016 clown sightings” phenomena. Created some time in late 2016 early 2017, It never felt like the right time to release them until now, because our previous expansion packs had always consisted of 10 cards (8 cards and 2 bonuses). Nestled alongside over a 100 cards, they form part of the outtakes.

It should be noted that early on with this clown set we experimented with the idea of having these court cards as Diamonds, Clubs, Spades and Hearts, which explains why the “Ace of Cups” clown is holding a heart. Over the eye of the Ace of Wands clown, the King of Pentacles Clown and the Ace of Cups clown we see a Club and Diamond and Heart symbol respectively.

Wednesday and Pugsley - 6 of Cups (bonus)

Granma, “It”, Wednesday and Pugsley - 10 of Pentacles

Wicked Witch of the West - 8 of Wands

Elvira at the stake - 8 of Swords

Included is the previously unreleased Queen of Swords “Grand High Witch” from “The Witches” movie.

Ray from Ghostbusters - 7 of Cups

The Grinch – 7 of Swords

Herman and Lily Munster - 2 of Cups

Bride of Frankenstein – The Tower

Elvira, Morticia and Lily - 3 of Cups

The Munsters family -10 of Cups

Giant Rat in the Sewer - 8 of Cups

Scientist - inspired by "The Mist" movie- 10 of Swords

Michael from “The Peanut Butter Solution” – 8 of Swords

The Tall Man (Phantasm) – 2 of Pentacles

Build a booger – 3 of Pentacles

Land of the Giants – Knight of Wands

Shopping for GMOS – The Empress

Gorilla sets out on a journey – 2 of Wands

Originally these cards were available early on with the standard deck but we eventually dropped them to help keep costs down. They are now added to this huge collection of alternative cards.

Psycho Squirrel (Inspired by the Simpsons “Happy Squirrel” card,) the card shows a flying squirrel jumping towards an explorer. Beneath the title the text reads “things take an unexpected turn”

Father Time – Father Time looks upon a broken down, abandoned carousel. Superimposed over the image are the ghosts of a happier time with children enjoying the rides. Beneath the title it reads “Passage of time / dates”

Lust – Inspired by Crowley’s Thoth deck “Strength” card. A vamp hovers above a hapless detective who is draining of color. He has fallen for her charms, the life leaving his body.

Rabid Raccoon – Three raccoon forage in the trash looking for food. Below the title the text reads “Thief”.

These were bonus cards from the Indiegogo campaign (our very first campaign of any deck). These cards were created when we reached various goals.

We generally do not ship this product to Europe/uk, only because even

more fees are included (which is out of our hands, this is a charge

by the printer). For those who really must have the deck and don't

mind paying more fees,you can click the box below.

Sorry we can no longer track packages for free. The cost of postage

to the United States has gone up considerably. If you want tracking

you must pay for it. We will ship without tracking but this is based

on a trust system. If people start abusing it we will have to stop

shipping to the US.