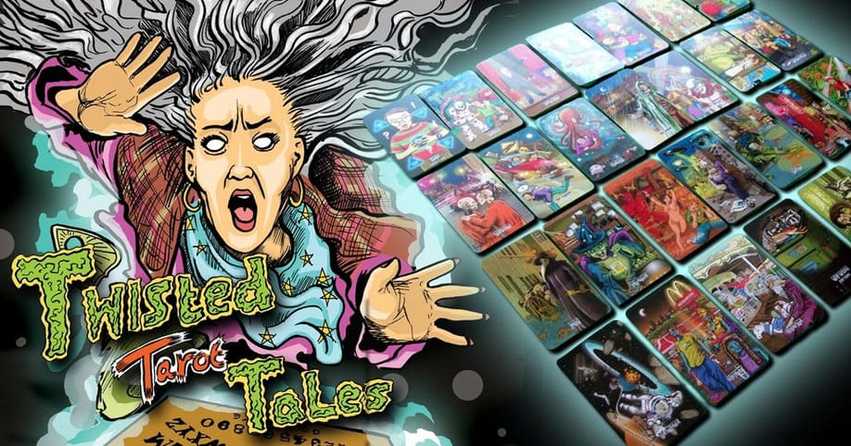 Download File
What is the Tarot Deck About?
The Twisted Tarot Tales is all about horror comics.  Filled with creepy clowns, mutated monsters, werewolf type beings, crazy magicians, evil seductresses and a myriad of other ghastly characters. Add to that a mix of real world ecological problems, mutations and genetically modified food, you name it, we run the whole gamut.

The Twisted Tarot Tales is inspired by the art, the stories and the irony found in old horror comics from the 50's through to the 80's. We first began working on the project in 2014 and finally completed it in early 2016. Looking at the project objectively, it's probably my best work so far. My artwork has grown leaps and bounds over the past 3-4 years, due in part to more research into technique, more practice and the use of more black ink. Previous works relied almost solely on color leading to a more animated style rather than comic book. Our horror tarot is a work we're really proud of and feel it stays true to the many great and colorful stories found in horror comic books over the years. My partner Christine's love of horror comics as a kid, coupled with my desire and love of drawing comic book imagery, blossomed into the Twisted Tarot Tales. I would say that about 90 percent of the ideas expressed in the deck are from Christine. Very unique, often thought provoking, it's a wonderful body of work.
When Is It Available?

It's exclusively available in our  store . Twisted Tarot Tales was originally launched through an Indiegogo campaign on Monday 25th of April 2016 and was funded at over 124%. On the July 29th, all decks had finally been shipped. By November the campanion book was completed, proofed and sent out. 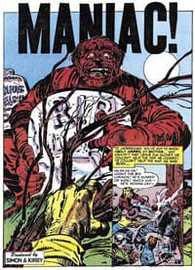 There can be no greater research of a subject than to have actually immersed yourself in it and as a child Christine immersed herself in horror comics like The Witching Hour, Black Magic, Charleton Horror Comics, Ghost Manor, Ripley’s Believe it or Not, Tales of The Unexpected among others and loved making up her own little horror stories.

Christine wanted to bridge the gap between tarot and horror and make it more accessible to those who perhaps aren't drawn to the overly morbid decks out there. We wanted to create something fun, something eye catching, yet something tasteful, and I really feel that we've achieved this with our horror comic themed tarot.

Christine prides herself on introducing unique ideas to creative projects, and in the world of tarot deck creation, up until fairly recently, comic book style art has hardly been touched upon. This includes horror comics too.
I think what makes this deck unique is that comic book style art is hard to find in the Tarot world. recently DC collectibles came out with something like Justice League Tarot. The artwork is great, no doubt about it, but in my humble opinion it doesn't instantly strike me as comic book art, regardless of if the art is based on DC comic book characters or not. I'm not saying that water coloured artwork has not graced comic book covers or even interiors, but not traditionally so. To my knowledge the only deck that comes close to a comic book style would be fellow Schiffer author Jeff Donato's Tarot D: The Didactic Tarot . There was another one by the name of Tarocco Dell'Orror which has quite a comic book style, (apparently my partner has two copies stored away is Rhode Island somewhere). Other than that I can't think of anything that comes close to the comic book style of work we grew up with and so I think that that's something almost unique to our Twisted Tarot Tales.

Throughout my own childhood, I spent days, weeks and months, years in fact, practicing my drawing. Drawing comic books was all I wanted to do for a living. I was influenced by everyone from Andy Kubert and Chris Bachalo, to Gene Colan and Jack Kirby. Well things change over time but I really loved Illustrating Twisted Tarot Tales; it has been the closest I've got to realising my young childhood dream. I view the entire deck as a series of 78 cover illustrations, the kinds of things you'd see gracing the covers of the comic book section of a news stand. 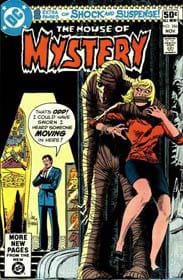 Joe Kubert's work on House of Mystery
An Intimate Project

Throughout the whole creation of Twisted Tarot Tales, we let everyone in on the process, from pencils and inks, to the coloring stage and color variations, and when we produced the alternative cards, we asked people their opinions on the better of the two images (the original and the alternative) for any given card. I like to believe that this is one of our strengths because we've been told by more than a few, that our deck felt like a community project, like everyone shared the journey with us. We've felt the same way and the response has been amazing. Early on in the creation of the deck we’ve even had a few card ideas for the Twisted Tarot Tales from the highly respected Bill Heidrick himself (As a teen, Christine wrote back and forth to Heidrick and they kept in touch over the years) and various suggestions by fellow comic book creators and horror lovers.
Books like “How to draw the human head”, “how to draw light and shadow”, “dynamic figure drawing” all by Burne Hogarth,  famous for his Tarzan illustrations, kept me burning the midnight oil. “Someday” I said to myself “people will enjoy my illustrations all over the world”. With fans as far away as Japan and New Zealand, all the way to the U.S, I feel that in many ways my dreams came true. I would say that most of my youth was spent with my nose in art books, teaching myself every day to get better and better at drawing. When I was reasonably happy with the progression of my drawing ability, from there I bought books on storytelling. Will Eisner’s “Storytelling and Sequential art” and Scott McCloud’s “Understanding Comics” were favourites. Over the years I've looked through many books based on comic book and commercial art and feel that I've found my style over time.

Creating A Quality Product Can Take Some Time.

One of the most common questions we were asked for the best part of a year,  was when will the deck will be complete and I've gotta tell you, I love it. Who wants to be working on a project where no one really cares when it's finished? Exactly lol, so we loved hearing how excited people were for the deck to be released. The creation of Twisted Tarot Tales has been a long journey, but a journey, I like to think, that was worth taking with you all. It felt like we were all part of the experience. Throughout the whole creation of Twisted Tarot Tales, you were with us, from pencils and inks, to the coloring stage and color variations. We asked you what you felt about each card and your opinions on alternative images for any given card and everyone has been so supportive, so helpful.
I have nothing against this form of deck creation whatsoever, it's just another form of expression and one that's more accessible to people than traditional hand drawn art. Being able to illustrate pictures in a way that you're happy with takes years. Trust me, I know all about it. It's only in recent times that I feel really happy with my own artwork.

Drawing the imagery from scratch also takes careful planning and time to create something that previously was only an idea, even when you are happy with your drawing ability, because I'm following my partners vision for each card. Yet, the end result is worth it to those who love hand drawn art, even if it takes much longer to bring into being. For those of you who joined our Twisted Tarot Tales Facebook page way back in 2014, and have been asking when we'd be finished, I admire your patience lol. Entire tarot decks have been conceived, printed,sold and gone through a second print run (ok maybe that's stretching it lol) over the period of time we've worked on this horror themed deck, believe me I know. Throughout the year I've drawn the imagery as fast as I can, yet I kept in mind that if I'm going to put my name to anything I do, I'm going to make something I would be proud of  for years to come. I've achieved that. This is the same approach I take for every piece of art I create, both for personal projects and for clients. All I can say is thank you for not giving up on us. We've finally made it.

We've dedicated over a year towards putting our absolute best work into creating powerful visuals with their eye catching colors, and now we have a great deck to show for it.
make the scene look natural with such a huge number of wands or pentacles is important if it is achievable. Our nine of wands features eight trees looming over a woodsman, with the ninth overshadowing him. They are recognisable as wands, but they fit naturally into the scene (or as naturally as a horror comic scene can look ). Our 10 of Pentacles has the pentacles as radioactive waste barrel lids facing us, an ironic twist to the family scene, where we see the results of nuclear war and it's affect on the happy home and happy family. Everything you see in the deck, down to its very detail, is a result of working on the deck almost full time (I am a freelance artist, so i was undertaking some freelance work too, and this, along with bag and deck sales of other previous decks, has helped keep up with the bills as I worked on the project). Continued below